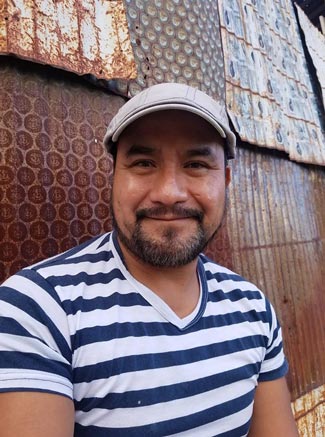 Born in March, 1974 in Santa Cruz Amilpas, Oaxaca, Mexico. Initially Pedro Cruz Pacheco’s artistic training was self-taught; he has exhibited and sold his works in Labastida Plaza in downtown Oaxaca and spent eight years working in the workshop of master painter Felipe Morales.

Pedro is from Santa Cruz Amilpas in the Valley of Oaxaca, the renowned center of folk art in Southern Mexico. Oaxacan art draws its strength from its native indigenous culture, rich with stories, legends, myths and folklore – and it features the interplay of animals, people, symbols, and motifs. A familiar theme of Mexican magic realism is the animal-spirit transformation of the nahual (a mythical spirit that can turn into a human) – people can fly, and mysterious juxtapositions are the norm.

Pedro paints the life he has known and the surroundings that he grew up in, incorporating scenes with calendas (street processions), marmotas (paper lanterns used in processions), farmers, animals, women wearing traditional Oaxacan dresses and skirts. He represents the indigenous ways with everyday features including water, earth, sun, milpa (corn field), countryside, hills, seeds, nopal (cactus), maguey – and ideas such as moon cycles, harvests, cycle of life and death. His iconic flying woman (mujer voladora), representing a woman with dreams of a good life, was influenced by his Chatino grandmother, who would comb her long wavy hair and tie it up in braids with colored ribbons. He incorporates strong, pure colors that are so prevalent in Oaxacan culture. He has created a collection of symbols that he regularly incorporates in his work: tiny wheels, cactus, trees, the spiral, leaves, the moon and sun, stars, water & water drops, heart with wings, plant spirals, feet and hands, eyes, lips, mermaids. He paints the flora and fauna that are in his region: hummingbirds, frogs, turtles, fish, clover, corn, palms, maguey.

Pedro was influenced by the work of Oaxacan artist Rudolfo Morelas of Ocotlán (a pueblo an hour from his home); he went to Ocotlán and saw the work in the municipal building. Since he was poor and had no money to attend art school or buy paints and supplies, he found a way forward to make art by apprenticing with Oaxacan master painter Felipe Morales (who comes from a pueblo just outside of Ocotlán) who paints in this very Oaxacan tradition of magic realism; he worked in Maestro Felipe’s studio for 8+ years. Still, Pedro is a primarily self-taught painter. His art is his life, it is an expression of who he is and he paints every day in his little home studio on the outskirts of the capital city. His art helps to prevent the way of life in the Valley of Oaxaca from being forgotten – it celebrates and portrays the richness of the culture that he grew up in and that still exists today, despite the encroachment of modernity and rapid change.

Pedro was a brickmaker in a brickyard for many years. He says: “I worked selling and making bricks, then discovered colors, in the brick dust, all around me, then the ground was my sketchbook, I grabbed a stick and began to scratch in the earth, and that’s how I started making my first work.”

In his own words:

My painting is a reflection of my religious beliefs, my life as an adolescent, and working as a brick maker as a young boy. Surrounded by so much suffering, I looked to nature and spirituality for a sense of comfort. As a child, I was always watching every detail of the world. I loved the colors of the earth, the fine dust that comes from tree bark, the sand for making bricks and the faces of the ancestors that can be found in the thick adobe walls of my town. When I was working, I began to trace the faces and figures I saw in the humid earth as the heavy molds were lifted from the bricks. During the rainy season, I loved to watch the soft colors of the fish and tule plants below the surface of the pools of water.

Painting makes me feel myself. The angels that are depicted in my art serve as guides for the people, protecting them and standing watch over them, clearing the bad things from their path. The warm and dusky colors reflect the way I feel. The broom, the trees, the sun and moon are icons, as are eclipses and the calm mountains, painted in blues and dark greens, which reflect the endless peace of the immense blue sky.